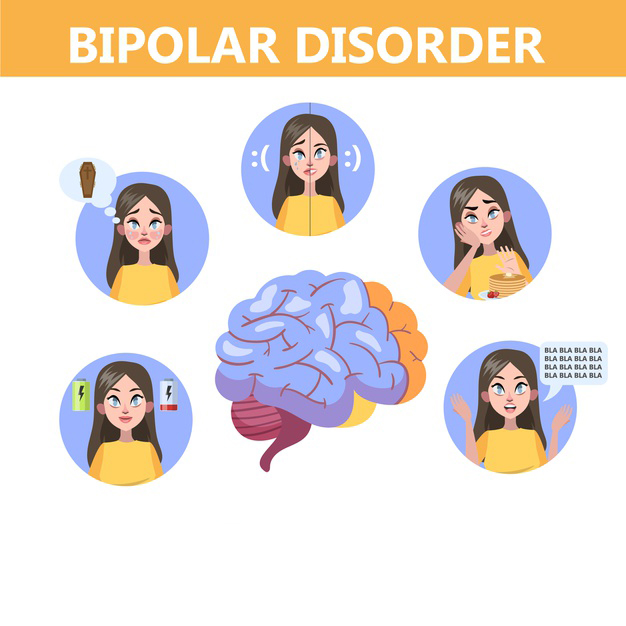 Mental health is often ignored in our society. People used to shy away and be ashamed to even acknowledge it, and thus used to cocoon themselves with it and suffer through life. Though in recent years, it has been much talked about and given its fair share of importance. Depression and anxiety are not just two illnesses related to mental health. There are several of them. Out of which we are going to discuss today on Bipolar Disorder.

The meaning of Bipolar disorder is that it is an illness associated with the brain that gives rise to a change in mood, strength, and ability to function. People suffering from bipolar disorder experience severe emotional states that occur for a few days or weeks. The medical terminology for bipolar disorder is manic depression. It is a type of mental illness that displays high and low mood swings. Such a type of mood disorder affects all areas of life.

There is a thin line of difference between bipolar disorder and depression, though similar in many ways, yet there is a difference, in simple words, while facing depression the person is constantly going through a low in his or her life, whereas a person having bipolar disorder faces bouts of both high and lows of life. Bipolar disorder can be controlled and cured with the right combination of behavior therapy and using specific medications for bipolar disorder. It is an illness that needs careful and timely management throughout life. To begin with, why not seek the help and guidance of a compassionate team at TruHap, Best Psychologist in Hyderabad. They offer numerous services such as Psychological Counselling, Occupational Therapy, and much more. Do check out further details on their website. Read further to know more intricately about this delicate health issue:

What is Bipolar Disorder?

The definition of Bipolar Disorder can be understood as an illness that occurs in periods or intervals wherein the patient feels extremely happy and energized, and in other instances feel extremely sad, sluggish, and hopeless. Between these two instances, he or she feels extremely normal. The signs of bipolar disorder are prominent by the highs and lows experienced by the patient. These highs and lows can be referred to as the two poles of mood; hence it is known as bipolar disorder.

Patients suffering from bipolar may face instances wherein they would feel very happy and enthusiastic and some instances wherein they would feel depressed, hopeless, and lethargic. Between these two distinct occurrences, they may feel completely normal. Consider these lows and highs as two poles, and hence this illness is known as bipolar disorder. Highs indicate mania or hypomania – wherein the person feels extremely happy and excited, whereas the lows indicate sadness or depression. A bipolar person experiences both these stages. However during the treatment of bipolar disorder – bipolar depression is often confused with major depression, hence it becomes quite critical to screen the patient for mania as well.

There are many different types of bipolar disorders seen across patients of all age groups. Each type of disorder is characterized by the duration and intensity of mood swings or changes. Amongst them the three major types are as below:

In Bipolar Disorder Type I, the patient experiences a minimum one manic episode that may occur before or after the major depressive occurrence or hypomanic stages. In some cases, this may lead to a break from psychosis or reality. The symptoms of Bipolar disorder type I include inflated self-image, hyperactivity, increased energy, reduced sleep, pressured and rapid speech, immediate change of ideas, and much more.

Patients suffering from Bipolar Disorder Type II face at least one depressive incident and at least one hypomanic occurrence but would have never faced a manic episode. The difference between Bipolar I vs. Bipolar II is reflected by the intensity of the manic occurrences caused by each type. The symptoms of Bipolar Type II have increased self-confidence, impulsive behavior, depression, and long periods of mood swings, low energy, and feeling of worthlessness.

The third type of Bipolar disorder is Cyclothymic Disorder. It is a gentle form of bipolar disorder. The meaning of Cyclothymic Disorder is cyclical mood swings between short and less severe instances of hypomania and mild depression. The lows and highs do not reach the duration of full mania or major depressive episodes. The major difference between Cyclothymic disorders vs. Bipolar is that Cyclothymic disorder patients face milder symptoms. It has frequent but less severe episodes of depressive and hypomanic symptoms. Symptoms mostly persist for two years.

The symptoms of Bipolar disorder are different for each patient. The symptoms vary in frequency, severity, and pattern. For some patients, the period may last from several months to years and for some, it occurs in rapid succession. There are 4 different types of mood incidents such as hypomania, mania, depression, and mixed instances. Each type of disorder has its distinctive set of symptoms. Bipolar disorder and depression has symptoms such as feeling worthless, guilty, eating less, suicide attempts, sleeping less or more, unable to concentrate, unable to make decisions, feeling negative or hopeless. Bipolar symptoms also include as below:

What causes Bipolar Disorder is kind of a mystery so far, that the scientists are still researching. The causes of bipolar disorder may be due to the combination of imbalance of brain chemicals, genetic factors, and environmental factors. It may also arise due to alcohol or drug abuse, severe stress, or may arise due to intense saddening episodes in life such as the death of a loved one, or childhood abuse.

Bipolar disorder is an illness that would require ongoing treatment and care throughout the patient’s life. The efficient treatment for bipolar disorder is the treatment that combines psychotherapy and bipolar medications. Though medication is the primary form of bipolar treatment, talk therapy or psychotherapy is recommended to prevent any future occurrences. The recovery doesn’t take place overnight. With the presence of prominent mood swings, the treatment has its fair share of ups and downs and thus finding the right kind of treatment for a patient may be variable, with many setbacks, and may take time as well.

Drug treatment is the cornerstone to treat bipolar disorders. Medication therapy is one of the most crucial components to manage the disorder and stabilize mood swings. Consuming a mood-stabilizing medication helps to reduce the lows and highs of bipolar disorder and keeps it in control. Medications for bipolar disorder include antidepressants, antipsychotics, mood stabilizers, and anti-anxiety medications. The therapist or the doctor may try several times to find the right and suitable medications with very few side effects. Many bipolar medications have side effects such as hair loss, weight gain, nausea, tremors, sexual issues, liver or kidney damage, and many more. Though these effects are prejudiced and may differ from person to person.

Though medication is the primary and most recommended treatment option for bipolar disorders, psychotherapy and counseling for Bipolar disorders is the next best option for treatment. In psychotherapy, a psychiatrist or a psychologist works with the patients to identify the triggers and to develop effective and healthy strategies to deal with and manage the patients stress and overall health condition. Counseling for bipolar is essential to deal with the disorder and the problems caused in the patient’s life. It not only helps to cope with difficult feelings, but it also helps to regulate the patient’s mood and improve their relationships. The doctor may even recommend support and educational programs for the patient and his or her family. Family therapy too is necessary for the family members, as it will help them to better understand the disease and its symptoms, also they will get to learn how to handle the patient and cope with it. While thinking about this option do seek the guidance and counseling of empathetic experts in this field, you can contact us at Truhap. You can reach out to them by filling your details in the contact form and be rest assured to receive a call back within 24 hours.

In most cases, drug treatment and Psychotherapy, and counseling may help to cure patients with bipolar disorders. But in some cases, patients require more help and thus hospitalization becomes necessary. Bipolar disorder hospitalization is mostly considered if there is an emergency, if it a threat to the patient or other members, and when medications are given need any kind of adjustment or monitoring. Some of the warning signs that indicate hospital treatments are any kind of dangerous behavior displayed by the patient, or when the patient has extended bouts of mood swings that may be risky for the patient or the family members.  Depending on the patient’s condition, hospitalization maybe required for a few days or weeks.

A person suffering from bipolar symptoms frequently displays intense, extreme, and disturbing emotional incidents that are known as mood swings. The person may feel extreme excitement or happiness known as mania or at times may feel melancholy also known as depression. The patient may get distracted easily, has impulsive behavior, lacks energy, suicidal thoughts, feeling worthless, facing problems to concentrate, focus or to remember stuff, change in appetite, and many more that varies from person to person,

How do I know if I am bipolar?

To check whether you are bipolar, first and foremost you have to look out for the signs of bipolar disorders and if you find it persistent, it is highly recommended to consult the doctor. Signs to look out for as below:

What are the 4 types of bipolar?

The four prominent types of bipolar disorder are as below:

Can a bipolar person live without medication?

A bipolar person may be able to live without bipolar medication, by following few natural remedies, by opting for other strategies and treatments such as psychotherapy and counseling.

Is exercise good for bipolar?

Though medication is the primary treatment to cure bipolar disorders, physical and mental exercise for bipolar disorder is highly beneficial. Exercise helps to reduce the symptoms and increased the risk of any health conditions. But it is advised to seek advise from your doctor before beginning any new exercise regimen.

What should you not say to someone with bipolar?

It is important to note that while dealing with patients suffering from bipolar disorders you should refrain from saying few things as below: