‘Children with autism are colourful, they are often very beautiful and like the rainbow, they stand out’ – Adele Devine

Autism has been widely known in the twentieth century, but like many disorders which we identify now, autism has been believed to have always existed. Autism is a developmental disorder. It presents itself in the first three years of life. It can be detected in a child as early as 18 months.
It is important to detect autism early as there is no known cause and no cure from the perspective of neuroscience, there have been ample evidence on neuroplasticity—if we intervene early, we have a better chance of changing the developing brain. Behaviourally, early intervention stops problematic behaviour from becoming a habit as age increases, including higher intelligence (IQ), and increased social and daily living skills.

What to do when you see your child or any other child who exhibits these symptoms?

The child should go through the following specialists (refer to the figure), then finally to a child development centre for therapies that may include behaviour therapy, occupational therapy (with sensory integration), speech therapy and special education as per the needs of the child.  Children with autism might hit developmental and societal milestones in a different order than their peers, but they are able to do it in their own time if these therapies are consistent. In addition to this, parents should undergo training so that they are able to help the child at home throughout the day as autism doesn’t come with a manual it comes with a parent who never gives up. 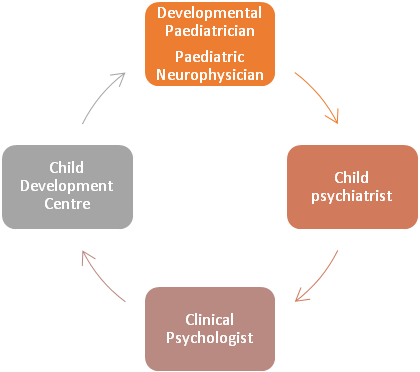 previous
As Parents we expect our kids to behave or develop right attitude.
next
Avoidance Foods For A Hyperactive Child